Today is the Ninety-ninth anniversary of the first American soldiers to be killed in combat in World War I. The three became national heroes and their names were printed in newspapers coast-to-coast. Today they are remembered together on Governors Island, where three roads carry their names.

On Nov. 3, 1917, German troops killed Private Merle David Hay, Corporal James B. Gresham, and Private Thomas F. Enright, all serving with Company F, 16th Infantry Regiment, 1st Division. The surprise attack by the Germans occurred at night, with vastly outmanned American forces engaging the enemy in hand-to-hand combat. German troops raided their trench position near the village of Bathelémont les Bauzemont, east of Nancy. “It was with fists and rifle butts that the Americans fought this first melee of death,” said the regimental historian. In the same engagement, eleven were wounded and ten reported missing, all from Company F.

It is believed that Corporal Gresham was the first American combatant to die in World War I. Witnesses saw Private Hay using a bayonet to fight two German soldiers during the battle, and he was found dead after the attack. Private Enright was killed in the same hand-to-hand fight. Two days later all three soldiers were buried on the battlefield where they fell. An inscription marked their graves: “Here lie the first soldiers of the illustrious Republic of the United States who fell on French soil for justice and liberty.” Later the three were reburied in the American Cemetery in Bathelémont.

Burial of the first Americans to die in the war, November 1918.

Only six months later the French dedicated a stone memorial to the trio in Lorraine. Inscribed on the granite cross with the names of Private Hay, Corporal Gresham, and Private Enright:

As worthy sons of their great and noble nation, they fought for Right, for Liberty, for Civilization, against German imperialism, curse of the human race. They died on the Field of Honor.

Merle David Hay was a farm boy and store clerk from Glidden, Iowa, who signed up to fight just weeks after the United States declared war on Germany. Within three weeks of enlisting Private Hay sailed to France, and a few months later he became one of the first three U.S. Army soldiers to die there. James Bethel Gresham was a factory worker in Evansville, Indiana, when on April 23, 1914, he enlisted in the U.S. Army. Thomas F. Enright was born May 8, 1887, the son of Irish immigrants. He enlisted in the U.S. Army in 1909.

In July 1921 the USS Wheaton and USS Somme returned 7,264 dead Americans to Pier 4 in Hoboken. General John J. Pershing and 5,000 family members were at the docks for a solemn ceremony for the war dead that were removed from French cemeteries. The three Doughboys were among the repatriated remains and they received honors. 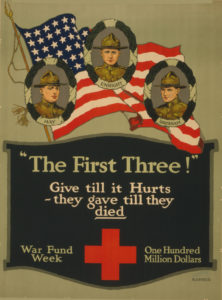 Private Hay’s remains were re-interred in his Iowa hometown. The cemetery itself, previously known as West Lawn Cemetery, was renamed Merle Hay Memorial Cemetery. Corporal Gresham’s remains were returned to Evansville and buried in Locust Hill Cemetery. A cenotaph dedicated to Corporal Gresham stands in Indianapolis on the American Legion Mall. On July 16, 1921, Private Enright was reburied with military honors in St. Mary Catholic Cemetery in Lawrenceville, Pennsylvania. A wreath from General Pershing was laid upon his grave.

Ten years after the Armistice, the veterans of the Sixteenth Infantry honored the three Doughboys at the headquarters of the 1st Division at Fort Jay, Governors Island. The charming, tree-lined road that stretches from Castle Williams northeast along Regimental Row and Colonels Row Green is Hay Road. Gresham Road disappeared in 2014 when Liggett Terrace was constructed; however, the plaque and honor remains in place. The road along the southeast edge of the smaller development zone is Enright Road. The historical marker is currently in storage with the Trust For Governors Island.

For more stories about the war, pre-order World War I New York: A Guide to the City’s Enduring Ties to the Great War (Globe Pequot Press), by Kevin C. Fitzpatrick, coming March 1, 2017.