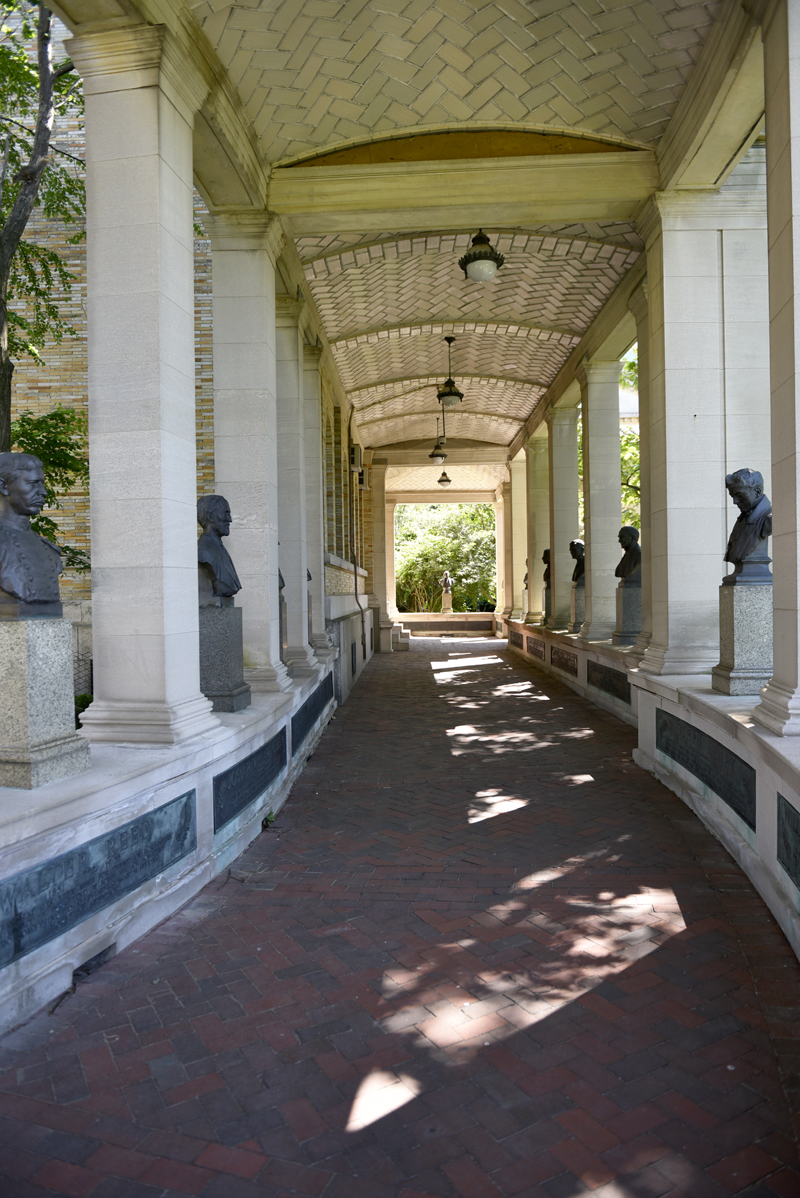 Hall of Fame For Great Americans by Joe Conzo, Jr.

I woke up today to find out that in a speech last night a plan was announced for something called a “National Garden of American Heroes” with a “vast outdoor park that will feature the statues of the greatest Americans who ever lived.” This is really surprising to me–and anyone else–who knows about the Hall of Fame for Great Americans, which has been in The Bronx since the first class was inducted in 1900. In fact, all of the “hall of fames” in America copy this one.

The list of names revealed last night raises eyebrows, not for the names the White House picked, but for the fact that so many are already in The Bronx. Men and women who already have sculptures from that list are John Adams, Susan B. Anthony, Clara Barton, Daniel Boone, Henry Clay, Benjamin Franklin, Alexander Hamilton, Thomas Jefferson, Abraham Lincoln, James Madison, Harriet Beecher Stowe, Booker T. Washington, George Washington, Orville Wright, and Wilbur Wright.

This would be akin to a movement to create a second Cooperstown, because you didn’t like the first Hall of Fame, so create a new one.

I had to get up to speed on the Hall of Fame for Great Americans to research and write about it for my award-winning book 111 Places in The Bronx That You Must Not Miss. Photographer Joe Conzo, Jr, and I went and looked at every single monument in the hall of fame. It’s beautiful.

The roots of the hall go back to the 19th century when New York University moved its campus from Washington Square to a lush campus overlooking the Harlem River. Chancellor Henry M. MacCracken dreamed up the hall and created an electoral college of great minds from across the nation to choose inductees. Stanford White designed the 630-foot long open-air limestone and granite colonnade.

The first class was inducted in 1900. Because fame can be fleeting, members must be deceased for at least 25 years. The 104 members are heavy on Founding Fathers, presidents, and inventors. It’s light on women and minorities. It makes for an interesting walk to think of who is not a member.

The usual suspects such as Samuel Clemens, Ralph Waldo Emerson, and the Wright Brothers take their places next to men and women you’ll need Wikipedia to tell you why they are famous. These are the white male ministers, preachers, and theologians. The top sculptors of the era were tapped: look for busts by Daniel Chester French (Edgar Allan Poe) and Augustus Saint-Gudens (Abraham Lincoln). Controversy swirled in 2017 when Confederate hall of famers were removed; there are empty niches of Robert E. Lee and Stonewall Jackson.

Seventy years after opening, NYU went broke, sold off the campus, and returned to Manhattan. Today Bronx Community College operates here. The hall hasn’t elected any new members since the 1970s, and no busts have been added in nearly 50 years.

We don’t need a second hall of fame or “National Garden” at this time. The ONLY upside I see is it would give work to more sculptors. But the thought of the headaches of creating more monuments, mostly to white men, is not something anyone would look forward to. In my thinking, if this is what people desire, follow the rules of the Hall of Fame for Great Americans, the process to nominate and elect members. Give the money to The Bronx and add sculptures here. Don’t build a second hall of fame. This would be akin to a movement to create a second Cooperstown, because you didn’t like the first Hall of Fame, so create a new one.