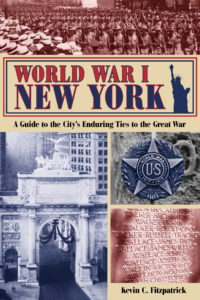 World War I New York: A Guide to the City’s Enduring Ties to the Great War

Winner of the 2018 Apple Award from the Guides Association for New York City, Outstanding Achievement in Nonfiction Book Writing.

In 1917 one million soldiers, sailors, and Marines departed for France to fight in World War I from New York. The city was an important hub during the war as the recruiting and patriotic efforts continued. Following the Armistice in 1918, more memorials were erected to veterans than for any other event, even the Civil War. Now on the centennial, explore more than 100 locations in New York that have ties to The Great War and tell the stories behind each.

Part One of World War I New York: A Guide to the City’s Enduring Ties to the Great War covers all five Boroughs of New York City, as well as parts of Long Island and New Jersey. These are the places that were active during the war years, 1914-1918. This guide shows where the war touched, from the recruiting offices in Madison Square Park to the location on Governors Island where General John J. Pershing departed for France. Most of these locations have never been written about before, and this guide includes maps to where they were located.

In Part Two, see the locations of the nearly 150 monuments and memorials in the city. While some might be familiar with the statue to Father Francis Duffy in Times Square, there are memorials and plaques tucked in quiet corners of all five Boroughs. New York has 15 Doughboy statues, more than any other city in the country, as well as tiny neighborhood memorials.

I have been researching World War I for many years. I’ve been giving walking tours of Governors Island since 2010: almost every street on the island is named for a soldier who was killed in the war. I began researching Cypress Hills National Cemetery in 2009, it’s another place I give walking tours. What I was surprised to learn–and to explore–is just how much the war impacted New York, and how after the Armistice the neighborhoods rallied to erect their own memorials. This guidebook allows me to show readers where World War I happened in New York, as the country remembers the war on its centennial.