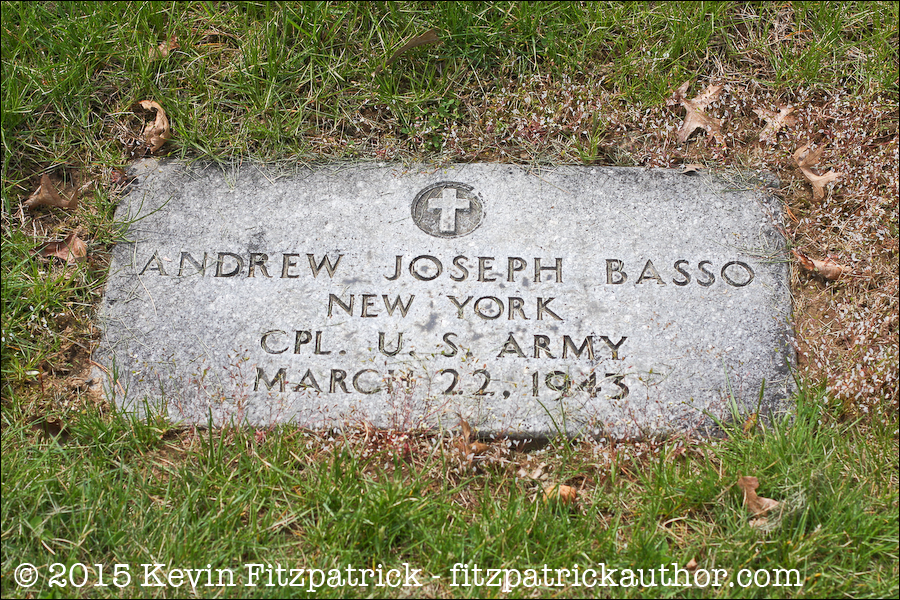 There is only one gravestone in the National Vaudeville Association plot that was given by the Veterans Administration, the federal agency that provides official monuments for U.S. servicemen and women. This is for Andrew Joseph Basso, and his tie to vaudeville and show business can’t be confirmed.

Basso was born 16 Nov 1892 in Manhattan to Italian immigrants. He was a bricklayer’s son and grew up on Bleecker Street in Greenwich Village. In 1917 he was a shipping clerk living in New Britain, Connecticut. 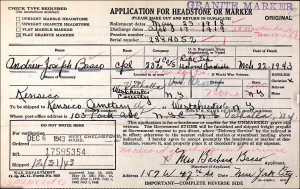 On 23 May 1918 he enlisted in the Army and was sent to recruit training in Camp Upton on Long Island. The war in France was on, but Basso never served overseas. He was in Camp Gordon in Augusta, Georgia, when the Armistice was announced. In just six months in uniform he attained the rank of corporal. Basso was honorably discharged on 28 November 1918 and returned to Connecticut.

His whereabouts after the war are unclear, as are his ties to vaudeville. In 1940 he was a census worker living at the Hotel America at 145 W. 47th Street. The hotel was popular with those in the Times Square and Hell’s Kitchen area, and many actors were residents.

Andrew J. Basso died 22 March 1943, age 50. It can be assumed that since he does not have a grave maker provided by the N.V.A., perhaps a friend or family member gave him the space in the burial ground. The government provided the granite gravestone.