I guess I’ve been to the museum inside the Statue of Liberty pedestal more than 250 times in the past few years. So I know it pretty well. I’ve been to this modest museum more than any other in New York City. Sometimes I went seven days a week. So I think I’m well versed in what it offers.

This week that museum was shutdown and a new $100-million glitzy museum opened in its place. I was one of the lucky ones to attend a sneak peek tour of the new Statue of Liberty Museum. It was organized by the Guides Association of New York City, which is the only professional tour guide association in the city, and is the biggest in the U.S. I’m proud to be a member. The National Park Service let us in early, so thanks to them for this. We got in last Wednesday, right after
the NPS’ own rangers saw it for the first time. So we got to be the first of the public to preview it; many like me go there a lot (more on that below).
Here are some brief observations. This is not a critical essay about the museum, it’s content, or curation of elements. 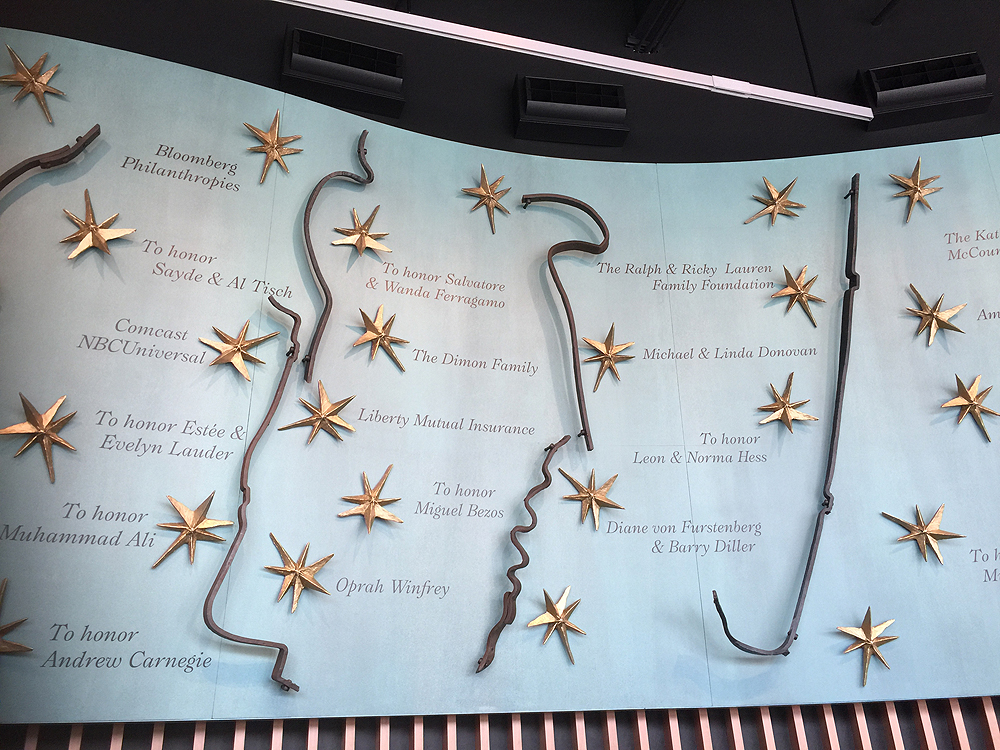 The wall with names of donors to the museum has pieces of the original armature bars as decorations.

The museum will hold 400-500. Everyone who comes to the Island is able to visit the museum; there is not a separate ticket required. The NPS wants to give all visitors with Grounds Only tickets access to the museum. Right now the NPS is waiting to see how the crowd flows through the museum, but there are two main points to know.

First, there will be one line to view the movie. It’s an excellent film told in three parts. This way a group of about 55 can watch the first part, then move to the second, and so on. They called them “nodes” and visitors stand up to watch them, and the sound comes up from the floor. The first part is the statue idea in France; second is the construction in Paris and voyage to NYC; third is its meaning and changing times. Visitors move through three separate viewing rooms and then are deposited into the Engagement Gallery.

Second, there is a second line to go right to the Engagement Gallery and not even see the movie. This takes the visitors to a history timeline, similar to what was in the old museum. We didn’t see him yet, but the bust of Édouard de Laboulaye is being moved to the first display, along with some of his writing that wasn’t on display previously. 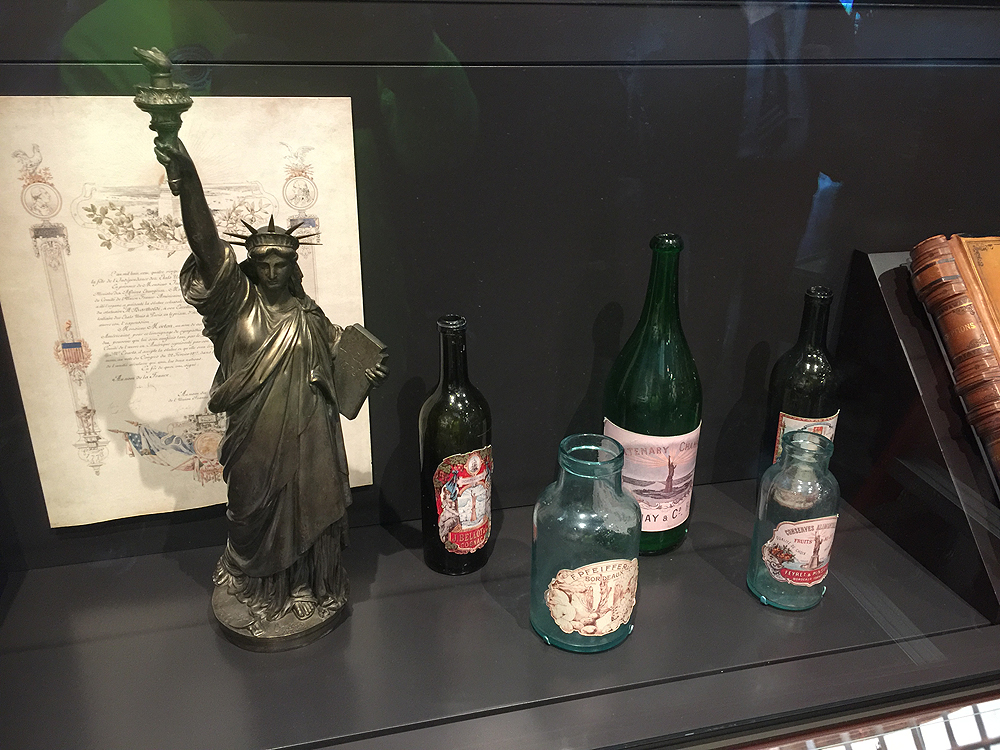 Artifacts from the fundraising era in France are moved to the new museum.

I’ll talk about artifacts next, because that’s my thing. Not everything from the old museum is being moved over. The big things all are on display, such as the replica face and foot, and the three models of Richard Morris Hunt’s pedestals (which look great). But from the old museum most of the items from the end of the tour aren’t there, and might be represented in the videos on the display walls (magazine covers, sheet music, posters). I did see my favorite items, of course the WWI trench art (and now a Doughboy helmet!), the menorah, models, and tchotchkes. I previously wrote about the old museum and it’s WWI collection.

The repoussé method is a little easier to see. It feels more like a setting for this education and the tools of the fabrication process. They added in audio “surround sound” of banging and clanging to seem like you’re a in a workshop. Not all of the displays were completed on our tour, so I won’t comment on that.
But let’s talk about the two big draws, the original torch and the roof. 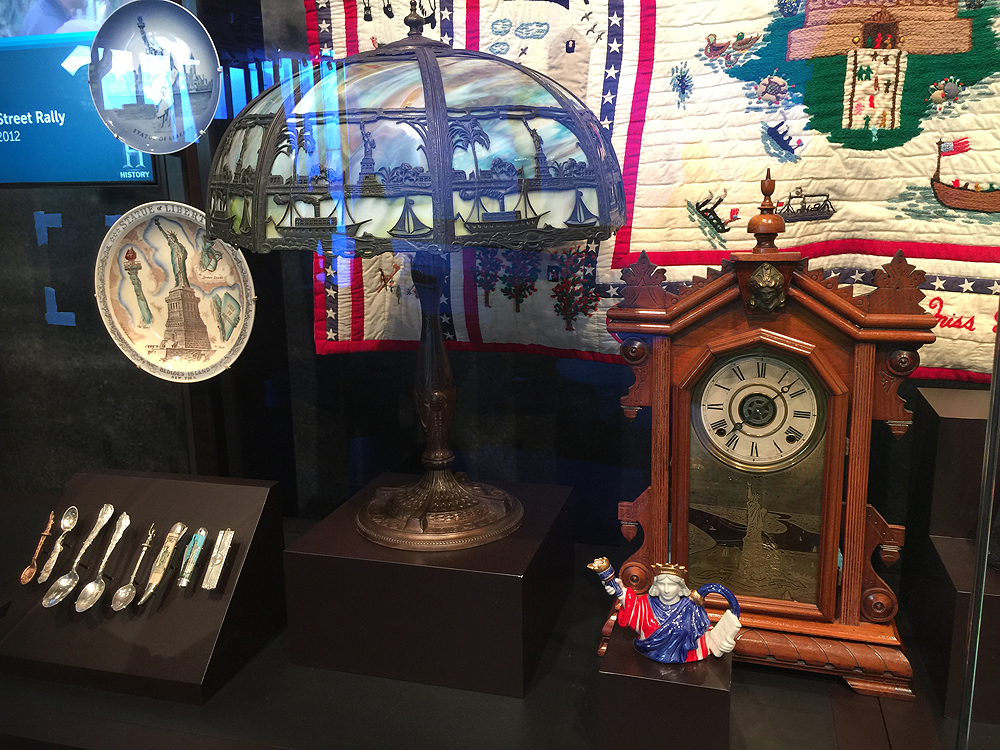 More of the collection of items related to the Statue over the years.

The whole tour ends with interactive elements that are engaging and designed to draw visitors to feel a tie to what the Statue means. I get it. But everyone will want to see the original torch. Unlike in the old location, which was inside Fort Wood on the ground floor, it’s in the middle of a brightly lit room, with windows around it. It looks much brighter. And the museum wired it, so the lights illuminate it from the inside. But the ranger said that since kids with backpacks are coming into the museum, there will be a ranger posted next to it to watch over it. There are benches on the perimeter to sit. If you take the photo from the right angle, you’ll get the Statue outdoors on its right side.

The roof. You can access the roof from two places. The roof has a stairway next to where the original torch is located. Walk out (one-way door) and the stairs lead to the roof. But the most popular way will be up the center outdoors, where the public doesn’t even need to wait in line to go through the museum. It has steps like the ones in Duffy Square. The view is grand and worth the look. You cannot guide up there, of course.
Judy Giuriceo, curator of the museum, gave the tour. I asked what her favorite artifact to be added from the collection was, and it kind of stumped her. Later it seemed to be a Statue made of LEGO blocks…

This is a small preview. But we did only see the museum about 80% completed, so more visits will be required. However, I will not be taking guided tour groups. The NPS begins its ban today on guides inside the museum and Ellis Island Immigration Museum. We can take our clients to the door if we wish, but we can’t guide them around the museum.