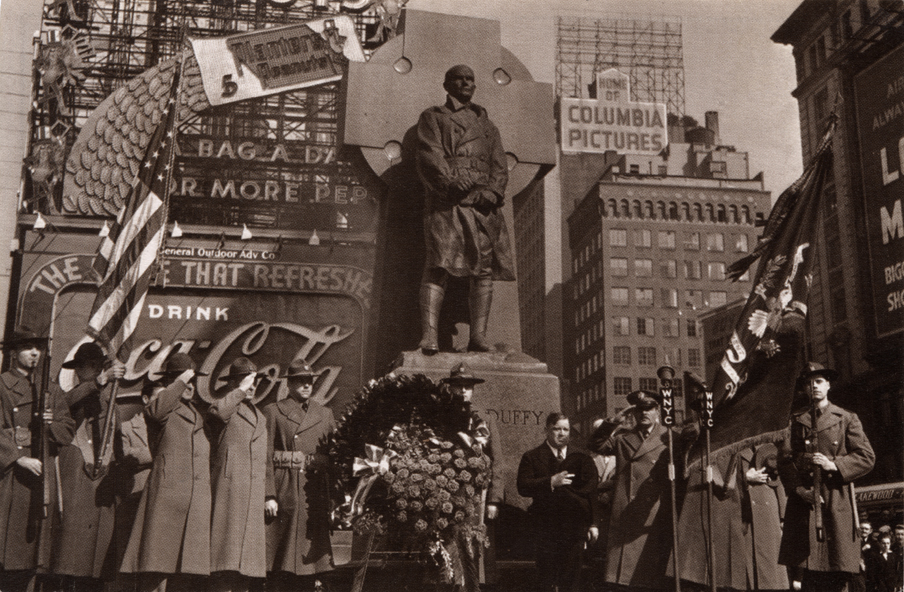 Come along on a walking tour of sites that were important to New York during World War I, from military, recruiting, and fundraising. Remember our honored war dead by visiting beautiful memorials around the city, from Midtown Manhattan to Central Park. This unique walking tour honors the centennial of WWI (1914-1918) and led by Kevin C. Fitzpatrick, author of World War I New York: A Guide to the City’s Enduring Ties to the Great War (Globe Pequot Press).

For this special tour, March 16, the day before St. Patrick’s Day, we are going to pay special attention to Irish Americans and their contribution in WWI. We will visit locations and places that have a tie to the Irish side of New York City. Learn about the Fighting Sixth-Ninth Regiment, which became the 165th Infantry Regiment and fought in some of the bloodiest battles of the war. Hear about the heroes and contributions of Irish New York. This tour will also include a stop at an Irish pub to raise a toast to those made the supreme sacrifice in the war (cost of your pint(s) isn’t included in the ticket, sorry).

American involvement in World War I started and ended in New York Harbor. In 1917-1918 troops departed from the city. New York was an important hub throughout the war as recruiting and patriotic efforts continued. Following the Armistice in 1918, more memorials were erected to WW I veterans than for any other event.

Now on the centennial, explore more 30 locations in Manhattan that have ties to the Great War and learn the stories behind each.

The walk begins at the New York Public Library on Forty-second Street and Fifth Avenue (between the lions, 476 Fifth Avenue). The tour includes a subway ride from Times Square uptown. The walk ends in Central Park.

Learn about what New York City was doing before the war to prepare, and how it responded to American entry in April 1917. Walk in the footsteps of the Doughboys who marched off to France to fight. See where the city rallied to support the war effort.

This 2.5-hour walking and subway tour will take you from the steps of the world famous New York Public Library to see locations in Central Park. Tour Highlights:

• See where the troops marched off to war;
• Visit the locations where bond rallies and fundraisers were held;
• See where the Army trained in the park, and raised awareness;
• See stunning sculptures and poignant memorials;
• Learn about the 69th Regiment, the “Lost Battalion,” and Harlem Hell Fighters;
• Explore secret spots of Times Square and Central Park (not in guide books)

Your professional guide has written seven books tied to New York City history and has been leading walking tours since 1999. He has made numerous talks and lectures, and has been featured on the Travel Channel’s Mysteries at the Museums, and C-SPAN American History TV.

Not only will you get a taste of New York history, but you’ll also be on a wonderful sightseeing tour and stroll the streets of one of the most charming neighborhoods in Manhattan. It’s a great way to learn about the past and also see how little has changed in more than two hundred years.