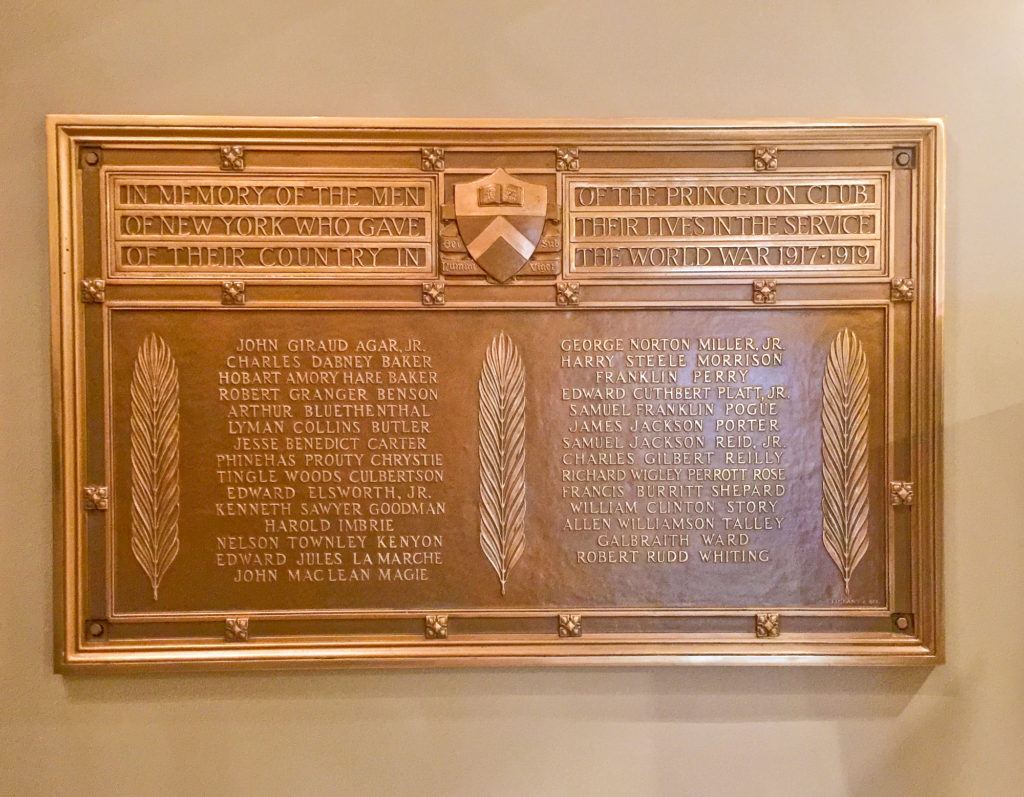 Princeton lost 151 men in World War I. Whether through wounds, accidents, injuries, sickness or the Influenza Pandemic, the toll was high. Of these 151, twenty-nine were members of the Princeton Club of New York. In the club entrance foyer is a beautiful bronze memorial to the honored war dead of the club. For my talk at the club on my book World War I New York: A Guide to the City’s Enduring Ties to the Great War, I decided to find out more about who these names were, who were the men the tablet honors. The memorial is in my book and these are the names. Before my talk, the club members took turns reading the names of the deceased men, for the centennial of their deaths. Today, many of the men’s legacies live on with memorial scholarships Princeton still awards annually. Thanks to Rocco Staino for inviting me to the club, and to the members for reading these names.

John Giraud Agar, Jr., Class of 1914
First Lieutenant, 22nd Aero Squad, 1st Division. Following a patrol over the St. Mihiel Sector, Agar died of injuries suffered in an air crash on October 21, 1918. Agar was 25. He is interred in Suresnes American Cemetery, France. Agar is also on the Columbia University Honor Roll, Class of 1919, School of Physicians and Surgeons. 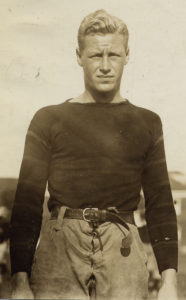 Hobart Amory Hare Baker, Class of 1914
The football and hockey star, Hobey Baker. Captain in the 141st Aero Pursuit Squadron, credited with four planes shot down. He was killed while testing a newly repaired plane on December 12, 1918.

Jesse Benedict Carter, Class of 1893
He was a Professor of Latin at Princeton from 1902 to 1907. Civilian volunteer. Died in Red Cross Service at Cervignano, Italy, on July 20, 1917. Posthumously decorated Commander of the Crown of Italy. Carter is interred in Rome.

Phineas Prouty Chrystie, Class of 1912
Captain, Instructor at the Fire School in Fort Sill, Oklahoma, when he was killed by an accidental explosion February 6, 1918. Age 28.

Edward Elsworth, Jr., Class of 1911
Lieutenant, killed in action October 20, 1918. Posthumously awarded the Distinguished Service Cross. Citation reads: “for extraordinary heroism in action while serving with 6th Engineers, 3d Division, in the Claires-Chenes Woods, France. When two machine-gun nests were holding up the advance of his company, Lieutenant Elsworth took three soldiers and by daring and skillful maneuvering captured both guns. Later in the same day Lieutenant Elsworth charged another machine-gun nest and was killed.”

Kenneth Sawyer Goodman, Class of 1906
Lieutenant, died two weeks after the Armistice, November 30, 1918, of pneumonia in Chicago before seeing action.

Nelson Townley Kenyon, Class of 1916
Wounded in action on November 6, and died on November 9, 1918 two days before the armistice was signed. He is interred in Woodlawn Cemetery.

John Maclean Magie, Class of 1892
Captain, Quartermaster Corps, died December 5, 1918, of pneumonia at St. Nazaire, France. Before the war he was a prominent journalist, working on the staff of the New York Tribune and Harper’s Weekly.

Harry Steele Morrison, Class of 1905
Before the war Morrison was a successful author of young adult adventure books; he met Queen Victoria and the Pope. Morrison volunteered for civilian war service and died in Washington, D.C., January 14, 1918.

Samuel Franklin Pogue, Class of 1904
Before the war Pogue was vice-president of his family dry goods company in Cincinnati. He was commissioned a Captain in the U.S. Army Quartermaster Corps, and was assigned to Washington. On December 12, 1918, he fell victim in the influenza pandemic, and died of typhoid pneumonia.

Charles Gilbert Reilly, Class of 1912
A civil engineer, Reilly entered the first Plattsburg civilian officer training camp in 1917 and earned a commission. He was a captain with Company D, 313th Infantry, 79th Division, arriving in France in July 1918. He was killed in action in the Argonne Forrest on September 29, 1918.

Galbraith Ward, Class of 1915
Sergeant, Company M, 306th Infantry Regiment. Awarded Distinguished Service Cross for heroism and bravery for rescuing wounded soldiers. Died of pneumonia on December 17, 1918. His brother, Corporal Marquand Ward, 312th Infantry Regiment, Class of 1917, had been killed in action two weeks earlier, October 18, 1918. The brothers are interred next to each other in the Meuse-Argonne American Cemetery.

Robert Rudd Whiting, Class of 1901
He acted in the Triangle Club and wrote humor for The Tiger. Before the war he was a journalist on the New York Sun and a magazine editor. Whiting was turned down for active service due to his age and frailty. He joined the war effort in public relations. Whiting died in the influenza pandemic October 15, 1918 while working for the Committee on Public Information in Washington.