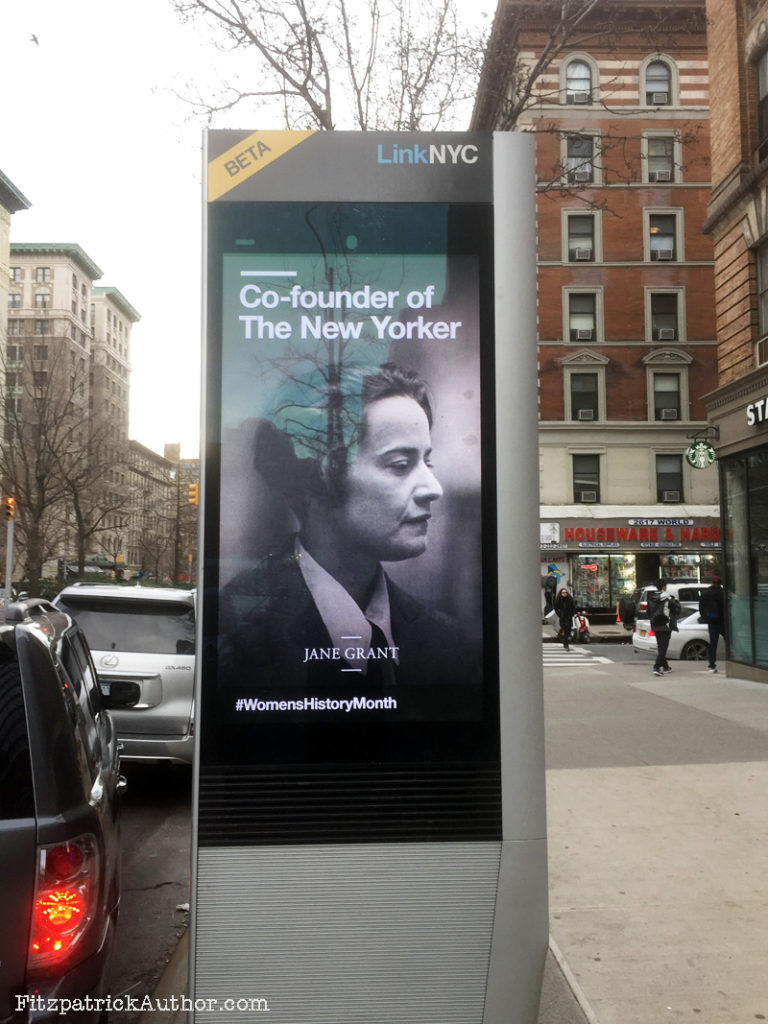 It is Women’s History Month. Who celebrates Jane Grant as the co-founder of The New Yorker? Was it, perhaps, The New Yorker? Or newyorker.com? Or another Condé Nast publication, such as Vanity Fair or Vogue? You’d be wrong in every case, just like you’d be wrong to choose The New York Times, where Grant was the first female reporter in the city room, before World War I.

The one (and only one) place that recognizes Jane Grant for Women’s History Month: On the 600+ nearly ubiquitous LinkNYC locations around the five boroughs that provide free WiFi, phone service, and charging stations. My jaw fell open when I came across one on Broadway yesterday, and it was a thrilling feeling to FINALLY see the woman getting some long-overdue recognition.

Anybody who has taken my Algonquin Round Table Walking Tour—which I started leading in 1999—knows that I always talk about Jane Grant while standing in front of the former offices of The New Yorker on West Forty-Fourth Street. How her husband, Harold Ross, said there would be no magazine without her. Grant was a true co-founder and partner to get the magazine launched, but in the 92 years since, she has been written out of the history of the magazine. Grant gets hardly a passing mention in the bookshelf of books written about the magazine and the many characters that have worked for it.

Maybe I started something with my 2015 book, The Algonquin Round Table New York: A Historical Guide (Lyons Press). I really hammered home that there would be no New Yorker today without Jane Grant and the Algonquin Round Table, facts often overlooked. People seem to forget that Ross was a nobody when he came to New York in 1919, following service in France as editor of Stars and Stripes. It was Grant, not Ross, who had years of media experience in the city, and connections all over the place. Ross was viewed as a hayseed; Grant was the one with relationships to influential people such as Ruth and Raoul Fleischmann, her bridge partners, who were the original financial backers of the magazine.

Kudos to the staff at LinkNYC. The “Links” around the city celebrate Jane Grant and scores of other amazing women this month. It is nice to know that LinkNYC beat major media companies to honor a truly pioneering writer and feminist. There are Links all around Grant’s old neighborhood, Hell’s Kitchen, including one by the home she shared with Ross and Alexander Woollcott, 412 W. 47th Street. This is where her Link photo was taken.

For more history stories, read The Algonquin Round Table New York: A Historical Guide (Lyons Press) and World War I New York: A Guide to the City’s Enduring Ties to the Great War (Globe Pequot).