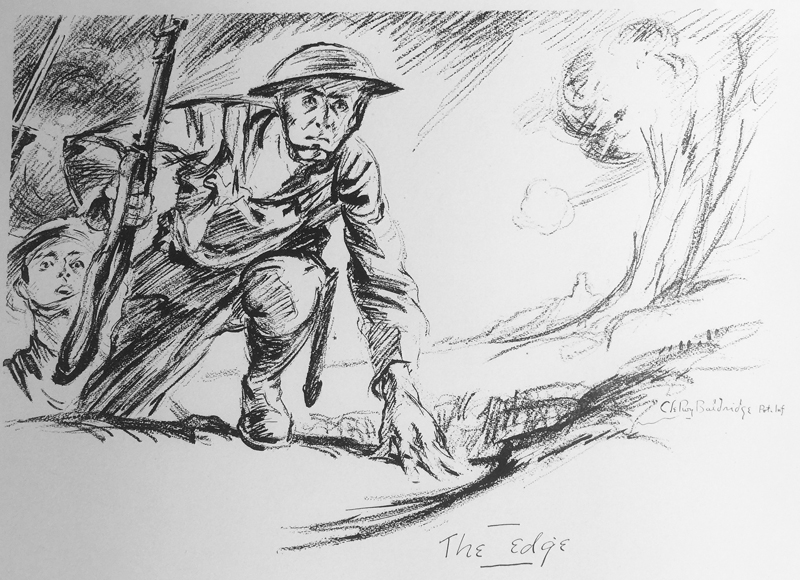 In thirty days is the centennial of American entry in World War I on April 6. To mark the occasion, beginning today I am going to post a daily countdown with a different sketch by Private C. LeRoy Baldridge. He was a sketch artist in the war and his work was widely distributed.

Here is a little more about Private Baldridge.

The first time I came across the work of Cyrus LeRoy Baldridge was through his ties to Harold Ross and Alexander Woollcott of the Algonquin Round Table. Ross was a private, Woollcott a sergeant, on Stars and Stripes in Paris during the war. Baldridge’s name (and work) kept popping up.

Baldridge was born May 27, 1889, in Alton, New York, midway between Rochester and Syracuse near Lake Ontario. His mother, Charity Eliza Baldridge, a travelling peddler and seamstress, raised him by herself and he was constantly on the move. She spotted his talent early on in the boy and put him into art school in Chicago when he was about ten. His skill was far beyond students much older. The boy developed a quick sketching style that served him throughout his long career.

He graduated from the University of Chicago in 1911 and began his art career drawing for newspapers and magazines. Baldridge joined the cavalry of the Illinois National Guard. 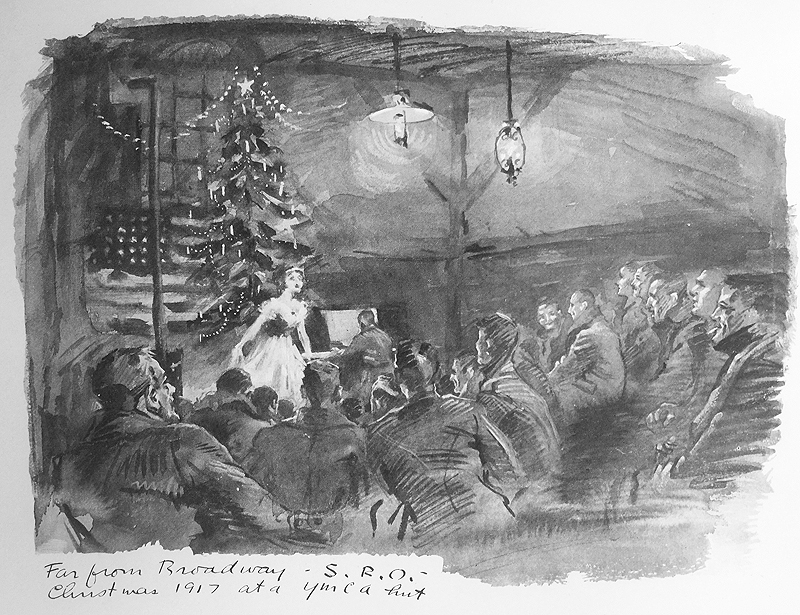 When World War I began he went to France in 1914 on his own to work as a war correspondent and frontline illustrator. He had access to the German lines and saw both sides of the trenches extensively; Baldridge said by the end of the war he had seen every inch of the battlefields. He went across the war zones on a bicycle and sent his illustrations back to the U.S. He returned home in 1916 in time to be sent to Mexico with his National Guard unit for the punitive expedition to capture Pancho Villa.

Before the U.S. entered the war in April 1917, Baldridge spent a year as a truck driver, ammunition hauler, and stretcher-bearer with the French Army. He was behind the wheel of a camion, but he always, always, had a sketchpad. Baldridge was in the Le Chemin des Dames (Ladies’ Way) sector, one of the most brutal battlegrounds of the war and location of the First Battle of the Aisne. After the war he wrote of his sketches, “most of them were drawn at odd minutes during the French push of 1917 near Le fort de la Malmaison, at loading parks and along the roadside while on truck convoy, and while on special permission to draw and paint with the French Army.” He was at Soissons with the French before he went to the American fronts from the Argonne to Belgium.

When the A.E.F. arrived in France Baldridge enlisted as a private in the infantry. After Stars and Stripes was launched by the U.S. Army on February 8, 1918, Baldridge’s art was included in nearly every weekly issue (often the cover). The editor, Private Harold Ross, called him the greatest artist in the war. 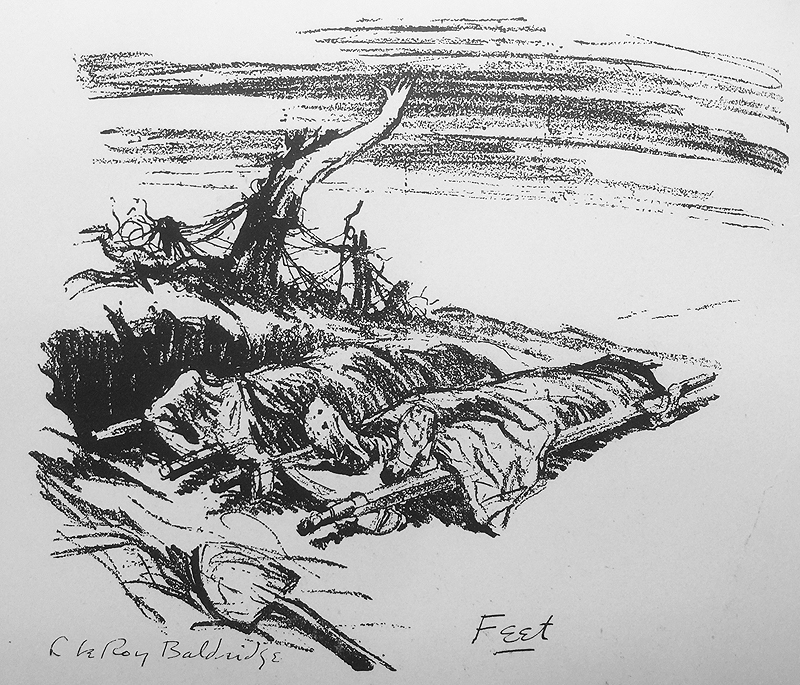 His work was sent beyond Stars and Stripes to be covers for Leslie’s Weekly and Scribner’s Magazine at home. After the war his artwork were collected into a small edition with a few color plates. Baldridge was dismissive of his efforts and talents.

“It has been a keen regret to me that my artistic skill has been so unequal to these opportunities,” he wrote in June 1919. “The sketches do not sufficiently show war for the stupid horror I know it to be.” He published I Was There in 1919.

World War I launched Baldridge’s professional career. Afterward, Baldridge met Caroline Singer, a newspaper reporter from Colfax, Washington, and Red Cross volunteer. In 1920 they formed a lifelong partnership, with Singer writing books about their travels and Baldridge providing illustrations. They ventured to China, Japan, the Middle East, and to remote parts of Africa in the 1920s and 1930s.

In Jazz Age New York they lived in the West Village on 11th Street and joined old wartime friends such as Franklin P. Adams, Jane Grant, Harold Ross, and Alexander Woollcott, all working for The New Yorker. Baldridge opened a studio in New York and had a four-decade commercial illustration and painting career.

He was also socially conscience and worked on causes that promoted world peace and human dignity. In 1947 he published Time and Chance, his autobiography in words and pictures, where he attempted to explain his worldview and philosophy after decades as a globetrotter in impoverished countries. In the 1950s the couple retired to Santa Fe where they could write, paint, and enjoy hiking the New Mexico countryside.

The end of his life was a tragedy. His wife suffered from a series of strokes and dementia, and Singer died in 1963. Baldridge continued working for another ten years, primarily painting.

On June 6, 1977, Baldridge took his life with his World War I service pistol. He was eighty-eight.

The new book World War I New York: A Guide to the City’s Enduring Ties to the Great War (Globe Pequot) is available now.