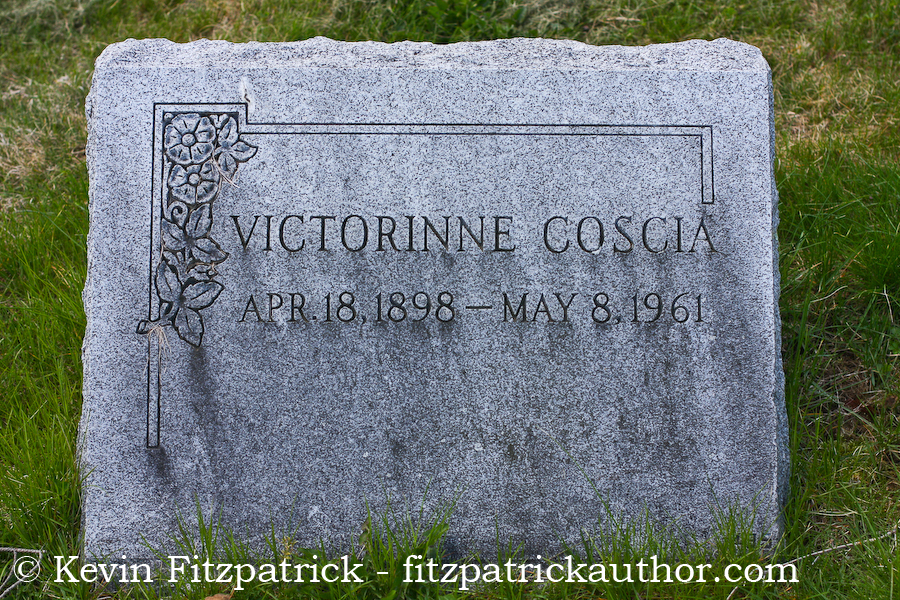 Victorinne Coscia, in the N.V.A. Burial Ground at Kensico Cemetery.

This is the grave of a Ziegfeld Follies showgirl who was in two of the greatest casts ever assembled, the back-to-back legendary Follies of 1922 and 1923. 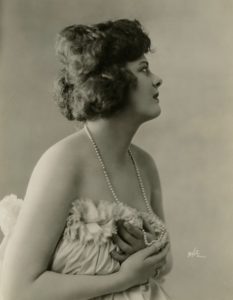 Victorine Voltaire in the Frivolities of 1920. (Thanks Brad Purinton)

Dancer Victorine Voltaire was a teenager when Flo Ziegfeld cast her; her two younger sisters, Jeanne and Rita, were also dancers. (Sister acts were a particular fetish with Ziegfeld; in addition to the Voltaire Sisters were Mary and Doris Eaton and five other sets of sisters in the cast). The 1922 edition had Ring Lardner writing sketches for Will Rogers, Gallagher and Shean came over from the vaudeville circuit, and Frank Tierney performed too.

Dorothy Parker was in the opening night audience, and reviewed the show for Ainslee’s:

Of course, the girls were there in luxuriant profusion, beautiful as ever. You wouldn’t feel justified in saying that they are a particularly neighborly looking lot, nor is it probable that there are many Phi Beta Kappas among the crowd, but a gorgeous eyeful they unquestionably are. Heaven alone knows where they come from, or where they go between Follies, for you never see anything like them around anywhere else. Which is undoubtedly all for the best. A poor girl trying to get along has enough competition to meet as it is.

The 1923 cast had Fanny Brice, Paul Whiteman and His Orchestra, and Eddie Cantor. There were more than 30 girls in the production.

Victorine was born Victorinne S. Walter in Pennsylvania on 18 April 1898, one of five children. Her English mother was a French teacher; in 1910 the family lived in Atlantic City where her father, an immigrant from France, worked as a clerk on the boardwalk. The girls took up dancing and adopted the stage name from the French Enlightenment thinker.

In January 1920 at the 44th Street Theatre, Victorinne was standout in the Frivolities of 1920 in the part of Beauty, and Jeanne Voltaire was also in the cast. Their shimmy shake got a warm review in Variety. Victorinne stuck with the show and toured to San Francisco, making a splash, giving “a good account of herself in classical and toe dancing.”

On 18 July 1934 in Manhattan she married Phil Coscia, a divorced vaudeville musician who became her agent. The couple lived in Astoria, Queens, during World War II on 30th Road.

On 8 May 1961, she died of a heart attack in her home at 305 West 45th Street, an apartment house across the street from the Martin Beck (now Al Hirschfeld) Theatre. Victorinne has a granite gravestone, not the usual N.V.A. gravemarker. It’s also one of the few to be upright, and it’s easy to locate in the burial plot. Her fellow performer from 1922, comedian Edward Gallagher, is buried about 100 feet away, and Ziegfeld’s gravesite is a short walk.