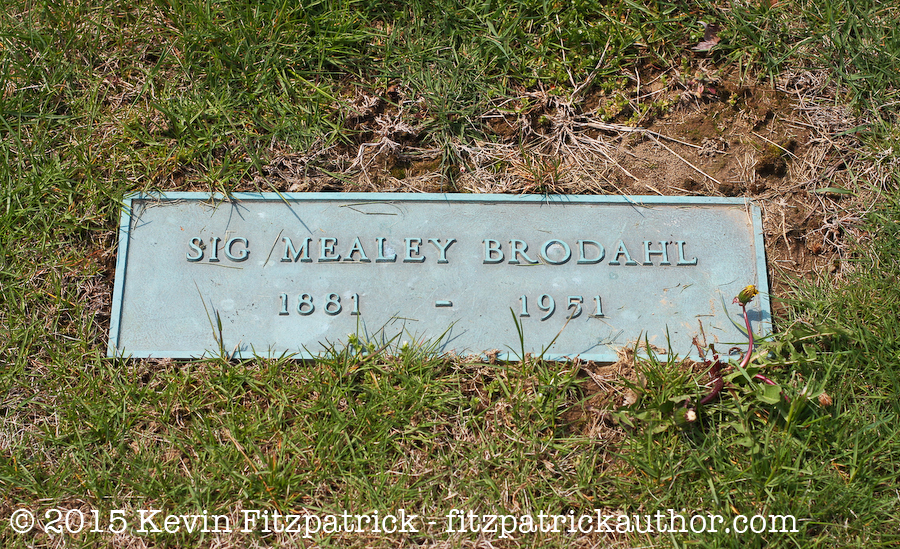 Sig Mealey was an accomplished acrobat who appeared in the Ziegfeld Follies of 1909, on the same bill with headliners Nora Bayes and Eva Tanguay, at the Grand Opera House. He was briefly married to burlesque and vaudeville star Babe La Tour. He’s buried in the National Vaudeville Association burial ground with his real and stage name.

Born 20 June 1881, possibly in Sweden, Segerd Oly Brodahl, he took on an Irish surname, perhaps to blend in with the other acrobats he performed with.

He was part of the act of Welch, Mealey, and Montrose that toured the circuit from coast to coast in comedy acrobatic and dance sketches, most famous for a burlesque of a baseball game. In a 1906 review of a performance at Chicago’s Majestic Theatre:

“Play Ball,” the name of the present act by Welch… and his partner Mealey and Montrose, is misapplied until near the closing of the sketch, when the trio introduces a genuinely funny satire on baseball… The acrobatics of Mealey and Montrose are excellent; some of the tricks, particularly the somersaulting, being remarkable. The acrobatic dancing of Mealey, together with the unctuous comedy of Welch and the hard work of Montrose, make the offering worthy the success it achieved.” 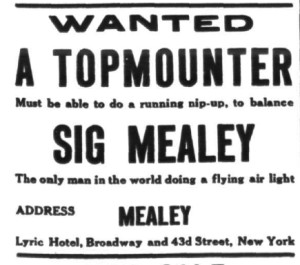 Also in 1911, he got married. On 9 Dec. 1911 in Manhattan he wed Jessie Latour, a burlesque dancer and singer who performed as Babe La Tour. Andrew Erdman, author of Queen of Vaudeville: The Story of Eva Tanguay, wrote, “A hip-shaking stripper named Babe La Tour billed herself as ‘The Eva Tanguay of Burlesque’.” 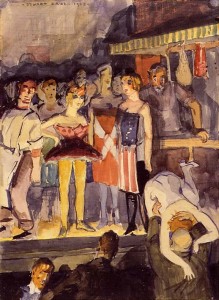 A young Mae West copied Babe and Tanguay. At the 1913 New York Armory Show, Stuart Davis showed a watercolor painting of Babe; today it’s in the Smithsonian American Art Museum. In 1918 the couple were living at 204 W. 109th Street. The marriage didn’t last. In 1922 she married Fred (Broomstick) Elliott, in Scranton, Pennsylvania.

A 1918 review from McVicker’s Theatre in Chicago proclaimed, “Mealey and Montrose won out with their acrobatics and dancing.” This trio was together for quite awhile; they performed together at the Fifth Avenue Theatre in 1920.

Nothing else can be found on Sig Mealey, retired acrobat. When he died in 1951, his remains were interred in the burial plot with other performers from his generation.