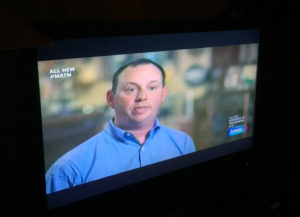 I made my debut last week on the Travel Channel on Mysteries at the Museum. The episode is Season 19, Episode 6: “Italian Sherlock Holmes, King of the Airwaves and Texan Takes Moscow.”

My part was the expert to describe the wreck and rescue of U.S. Navy submarine O-5 in 1923. It went down in a collision outside the Panama Canal. The story concerns two sailors trapped underwater and the daring rescue to save their lives.

There were two heroes in the story. Torpedoman’s Mate Second Class Henry Breault was born in Connecticut. He served four years in the Royal Navy, enlisting when he was just 16. After World War I he joined the U.S. Navy and was sent to submarine training. Breault was 23 at the time of the disaster.

The O-5 was leading a column of four O-class subs that were enroute to the Pacific via the Panama Canal. The merchant steamship SS Abangarez, owned by the United Fruit Company, was steaming towards dock number six at Cristobal. It was carrying fruit from Cuba.

The Abangarez was on the wrong course. At around 6:30 in the morning, a combination of bad communications and mistakes put it on a collision course with the sub. The steamer hit the sub on the starboard side of the control room, making a hole ten feet long. It rolled sharply to port, then to starboard, and sank in 42 feet of water in less than one minute.

The O-5 started taking on water immediately and began sinking right away. Some of the crew was topside and others climbed out the conning tower hatch. Sixteen jumped in the water and were rescued. Three men drowned.

Breault was in the torpedo room when the collision occurred, and climbed up a ladder to the main deck. He was about to jump in the water when he remembered his shipmate, Lawrence Brown, was still in his rack. Breault shut the deck hatch just as the bow went under, and then went back down below to get Brown.

They headed aft to exit through control, but water coming in from the forward battery compartment cut off their escape. The men fought through rising water to get to the torpedo room and shut the door. The batteries exploded. They were trapped with only a limited amount of good air to breathe. They would spend the next 31 hours underwater with a limited amount of air to breathe.

On the surface, the captain and crew took a head count and noticed 5 men were missing. They recovered 2 bodies from the water so that left 3 unaccounted for. They turned to the Canal Dock workers for help in recovering their men still on the sub.

The second hero of the story was Shep Shreaves, 38, and a veteran diver with thousands of hours underwater. He was the dockmaster and foreman of the mechanical crew on the canal. His expertise was spending long hours in a diving suit doing salvage work.

He followed the air bubbles to the torpedo room and rapped on the hull with his diving hammer. When he heard the trapped men faintly rap back, he knew they were alive. He could see the sub was resting on the muddy bottom 42 feet under the surface, so he formulated a rescue plan to raise the O-5.

There was no way to rescue the men underwater using lifesaving operations like the Navy would today. They could not cut into the hull and take them into a rescue chamber. Underwater submarine rescues like this had never been tried before. There was only one option: Hoist the sub to the surface and open the hatch.

The Ajax was a civilian ship with a massive crane on a barge, able to lift 250 tons. The Navy put an emergency request to bring it to the O-5 wreck. The Ajax was hours away and rushed to the scene.

Shreaves went to the bottom to dig a tunnel under the sub, using high-pressure hoses to blast the mud. He was in a dangerous position because the mud could trap him underneath the O-5. He snaked heavy cables underneath it, connected to the surface ships. He also continued rapping on the hull, to alert the sailors that help was on the way.

The sub was trapped in the mud and heavier than anticipated. It wouldn’t budge. The cables snapped. The cables snapped twice, each time requiring Shreaves to maneuver again underneath the sub and reattach the lines. This operation stretched for more than 24 hours.

Shreaves was nearing 24 hours in the diving suit, refusing to go up until the submarine was freed. He was risking his life by staying down so long; no man had ever attempted this feat and the ship’s doctors were concerned about his condition.

Shreaves was exhausted after the two attempts and 24 hours underwater. He attached the cables once more. Shreaves went topside and released compressed air into the engine room, forcing water out and making the sub more buoyant. Water and mud bubbled to surface, Shreaves signaled the Ajax to make the third attempt. Slowly the O-5 broke the surface. The plan worked; the rescuers were heroes.

After being trapped for 31 hours, they looked more dead than alive. The Navy rushed them to a decompression chamber and hospital in Colon. They were dehydrated but glad to have overcome the odds and survived.

President Calvin Coolidge awarded the Medal of Honor to Petty Officer Breault in 1924. It was awarded for Breault’s uncommon valor in going to the aid of a fellow shipmate who most certainly would have died if Breault had not intervened, with complete disregard of his own safety. He spent another two decades in the Navy.

Shreaves was awarded the highest civilian honor available at the time, the Congressional gold lifesaving medal. The following year Breault and Brown went back to Panama and gave him a gold watch.

This is a story of firsts:

● First submarine rescue raised from the bottom by another ship;
● First, and only, enlisted submariner to be awarded the Medal of Honor for actions aboard a United States submarine;
● First man to dive for 24 hours in the longest continual dive.

Today, Petty Officer Breault’s Medal of Honor, which is not a mystery any longer, is kept in the Patriots Point Naval & Maritime Museum in Mount Pleasant, South Carolina. The site is near the aircraft carrier USS Yorktown.