One hundred years ago on Sunday, General John J. Pershing woke up in Times Square. He was in bed in the Astor Hotel, which once was on the corner of Broadway and W. 44th Street. I do not know how he got from Forty-second Street to the Battery Maritime Building at 10 South Street, but I like to think that instead of a car he and his group took the Interborough Rapid Transit Company (IRT) on either the Subway Division or Elevated Division. However he travelled, the destination was to go to Governors Island. 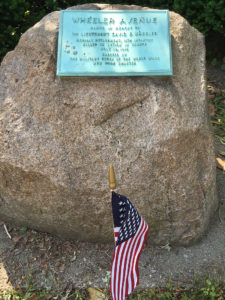 I am going to be there on Sunday for the centennial. For the second year in a row I’m going to be flagging the war memorials around Governors Island; there are close to fifty of them. At 12:30 I’ll be giving a talk about my new book World War I New York: A Guide to the City’s Enduring Ties to the Great War. It will be held in Nolan Park Quarters 4B (I’ll be there all day) at the Empire State Center for the Book.

One hundred years ago, General Pershing also arrived via ferry to the island.

He was the recently appointed leader of the American Expeditionary Forces, and President Wilson had named him to lead the expanding U.S. Armed Forces to fight in France and the ocean in-between. On that day, May 28, 1917, General Pershing was trying to travel incognito. He was attired in civilian clothes and a straw hat. He had about 200 with him, the advance party that was going on the ocean voyage.

General Pershing met with the army’s commander of the Eastern Department, Major General J. Franklin Bell. A former Army chief of staff and head of all Philippine Island troops (where he won the Medal of Honor), Bell had once been Pershing’s superior officer, and he wanted European service under General Pershing. But to Pershing, Bell was an old Indian fighter, past his prime at age sixty-one, and he would not be taking him to France. (Bell passed away on Governors Island eighteen months later.) 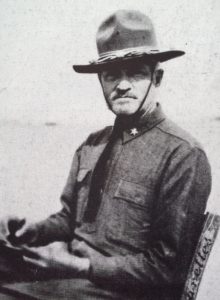 There is no record of the meeting location, but how I picture it, the two generals met privately in the Commanding General’s Quarters (This is Quarters One, the white-columned home with two cannons in front). The house is on Generals Row. Aptly named.

While on Governors Island, Pershing gathered fewer than two hundred men for the advance party to ship to France: officers, enlisted personnel, civilian clerks, and interpreters. Among the handpicked team was Captain George S. Patton, sent to command infantry, who famously switched to the new war machines, tanks. Pershing and his men lined up on the Quartermaster Dock (today called Pier 101) in a cold, driving rain. The tug Thomas Patten picked them up and chugged out to Gravesend Bay and the waiting White Star liner SS Baltic, anchored off Brooklyn in rolling waves. The men had to quickly jump from the tug to the liner. Once safely aboard, the men slipped out of American waters and headed to Liverpool, England.

Incredible as it may seem today, this was the start of U.S. forces in World War I, a war that would ultimately claim more than 116,000 Americans. It’s an honor to retrace General Patton’s steps. If you see small American flags around Governors Island, take a moment to read the memorial plaques.