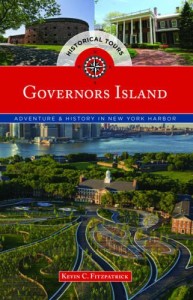 I am happy to announce that my latest book has been nominated for an Apple Award, presented by the Guides Association of New York City. This is a big honor for me and my book, The Governors Island Explorer’s Guide: Adventure and History in New York Harbor. This is the second consecutive year I have been nominated for an Apple Award; last year I was also up for the award for The Algonquin Round Table New York: A Historical Guide.

The category is Outstanding Achievement in Non-Fiction Book Writing (published October 1, 2015 – September 30, 2016). I’m up against stiff competition once again, but as I said last year, it’s just an honor to be nominated with this group of authors and editors. My publisher for both books is Globe Pequot, a division of Rowman & Littlefield.

The awards are presented by GANYC, the only professional association for sightseeing guides in the city (I’ve been a member for almost two years). This nomination means a lot to me because the awards are voted on by my fellow tour guides. My book is the only guide book nominated among the five titles this year. I specifically wrote the book for visitors and tour guides, to get both to visit Governors Island.

That’s exactly what my book is about: to get visitors to go to Governors Island, the city’s newest large public park, in New York Harbor.

This could be a good year for Governors Island at the Apple Awards: Also nominated is the retired president of the Trust For Governors Island, Leslie Koch. She’s nominated in the category for Outstanding Achievement in Support of New York City Culture. I hope she wins; Leslie was always supportive of my book and helped me out with access and approvals. I don’t think the Island would be where it is today without her. 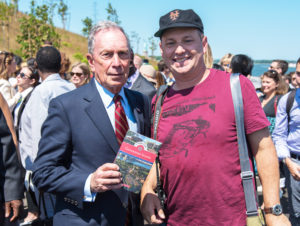 One of the reasons I wrote this book is because I saw a real need for it. I’ve been going to the Island since it opened in 2003, and I always expected someone would beat me to the punch and put out a guidebook. I worked on it off and on for five years, always thinking, every year, someone else would write a book about Governors Island. So far, I own the market. The book has been selling OK, but if the award happens, maybe it will help push sales. It got a nice review from the Times when it came out, and the Amazon reviews have been stellar. The book is sold on the Island in the bookstore in Castle Williams, managed by the National Park Service. It’s also available in many city bookstores.

The 2017 GANYC Apple Awards will be announced on March 6th, 2017 in a gala awards presentation.