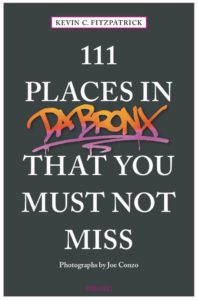 The Bronx native Bill Finger, who co-created Batman and his world with illustrator Bob Kane, is going into the New York State Writers Hall of Fame, it was announced Tuesday night. Finger’s house on the Grand Concourse, where he lived with his parents while writing Batman, is in my book 111 Places In The Bronx That You Must Not Miss (Emons). The book is nominated for an Apple Award by the Guides Association for New York City. Finger, who’s been deceased for decades, is a fantastic choice for this honor.

The full press release from the Empire State Center for the Book:

Noted writers Edwidge Danticat, Andrea Davis Pinkney, Lore Segal, and Garry Trudeau are among the seven members of the 2020 Class of Inductees for the NYS Writers Hall of Fame. The four will attend the induction on Tuesday, June 2, 2020, at the Princeton Club of New York. Rocco Staino, who serves as the Director of the Empire State Center for the Book, made the announcement on February 4 during a Facebook Live event on the center’s Facebook page. The Center for the Book is the organization that oversees the Hall of Fame. In addition, three deceased writers: Bill Finger, Anna Katherine Green, and Oscar Hammerstein II will be inducted.

“This year is the 11th anniversary of the New York State Writers Hall of Fame” said Rocco Staino, Director for the Center of the Book. “Each year the interest in the Hall of Fame grows with a number of nominations coming from the general public.”

The full list of the 2020 inductees is as follows:

Anna Katharine Green – Buffalo resident was the mother of the detective novel.

Oscar Hammerstein II – Lyricist and librettist of the American theatre..

Garry Trudeau – Raised in Saranac is the creator of Doonesbury.

This year the NYS Writers Hall of Fame is presented in conjunction with the New York State Writers Institute, a literary organization which is based at the State University of Albany. The institute enhances and celebrate literature, writing, and performance.

This year’s NYS Writers Hall of Fame inductees were chosen by a selection committee: