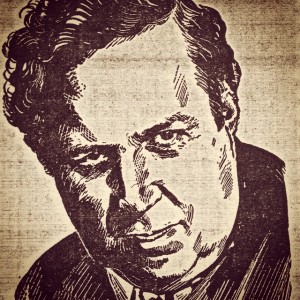 In 1927 Heywood Broun was among the highest-paid columnists in the city. His column, “It Seems to Me” in the World ran opposite Franklin P. Adams’ “The Conning Tower” on the “Opposite Editorial” page. Broun ran afoul of World publisher Ralph Pulitzer for repeatedly writing about the Sacco-Vanzetti case. The breaking point came when Pulitzer cancelled Broun’s column and suspended him. Broun subsequently wrote to Herbert Bayard Swope, who not only was the World’s colorful executive editor, but also a member of the Thanatopsis poker club with several Round Table men.

I’m sorry that the World is not willing to accept a cash settlement and release me from my contract. I must take issue with some contentions set up by the World. At the present time the World is making a profit through its contract with me. The bonus which I received when I signed and part of my salary was for the benefit of exclusive newspaper services. If I worked for another newspaper a certain number of World readers might conceivably shift. It does not matter whether they would number ten or one hundred. As things stand the World has the benefit of keeping me out of competition and at no expense whatsoever. This irritates me. While the World has expressed a willingness to have me return to work it can hardly be eager. Obviously the present situation is wholly satisfactory to the paper or it would have accepted the entirely sensible plan suggested by Morris Ernst. Surely I would not foment another break particularly if there were a penalty clause.

Both Morris and Gerald Brooks expressed a willingness to guarantee the money payments for which I would be responsible if I quit work during the early stages of the contract. I fail to understand the World’s objections to this scheme. If anybody says that the terms of the contract cannot be changed during the life of the contract I will answer that the terms were changed. As you remember I did have the privilege of giving six months notice in the original contract and surrendered it at the time Alec came on the paper. It is true that my work was materially cut down by this arrangement and my salary continued at the old figure. Naturally I wanted to be obliging in the matter, but I could have maintained a stiff legalistic attitude and expressed horror at any change in the terms of the agreement during its life.

Mr. Pulitzer saved me some trouble by giving me permission to write for periodicals other than newspapers and this may have been a free will offering. Indeed I expressed my thanks to him for this permission. Nevertheless this gift did not come until Mr. Brophy had talked with Laurence Greenbaum, who pointed out to him a clause in the contract by which I had the privilege of writing for magazines. None of the lawyers had the slightest doubt but that I could win this point but of course it was pleasanter to get it without the bother and expense of court action. You are mistaken in the impression that I promised to come back to work the next day. Just consider, we had our talk on a Tuesday night—at the very most I would hardly have returned until the following Monday. And you will also remember that the return rested upon working out some sort of column in which I could explain my feelings concerning the break and at the same time write nothing which Ralph Pulitzer might be unable to digest and swallow.

That would not have been easy for I got the impression at the dinner that he had no feeling of being in any detail at fault. The suggestion of a cancellation clause seemed to me excellent since it provided a practical means which would assure fair dealing and give and take all around. I am sorry if you feel that I have used you badly. Still, I have in a measure the same feeling about you. It is true that you were away at the time of the split but my vanity, if nothing else, was hurt by your delay in trying to make an adjustment which would have been comparatively simple some months ago.

It is now impossible for me to return to the World—as I promised Mr. Villard that I would not go back unless the paper was prepared to give me the same freedom of expression which was afforded me by the Nation. In that there are no strings except libel and good taste, and as my agreement reads: “You, yourself are to be the judge of what is good taste.” The World might very well have taken such a chance for I would have been so pleased by a generous gesture that I would have taken pains not to abuse my privilege of free expression. I hate to have no newspaper medium of expression and as I said, the World is sitting pretty. It has no keen desire for my services itself, save what it paid me in salary and at the moment is able to keep me off any other paper. Polachek (if that’s the way his name is spelled) said he was certain he could break the contract and the Hearst people would pay me during litigation. It’s too bad Hearst is such a rotter. But for that I would have gladly accepted the offer. I must admit that neither of the two New York papers for which I would be willing to work has offered anything half so handsome. Probably I shall have to sue on my own account sooner or later because the present status seems to me unfair. I still feel that a cash settlement would be an entirely just arrangement and made the offer in spite of the fact that Morris advised me not to do so.